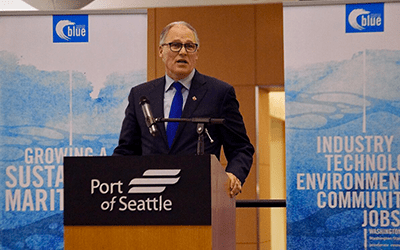 The maritime industry has long been an anchor to Washington’s economy. Government and business leaders want to make sure that continues, especially with climate change and sustainability concerns looming.

That’s the ethos behind the state’s first maritime startup accelerator, which officially launched Tuesday evening at the Port of Seattle headquarters.

Gov. Jay Inslee spoke at the event. The maritime industry runs deep in the governor’s family; his grandfather was a salmon fisherman in Seattle.

“I could not be more excited about this because it’s an extension of the basic value system of the state of Washington,” Inslee said, pointing to other local innovation across industries such as retail, gaming, life sciences, and agriculture.

The Port teamed up with WeWork Labs — WeWork’s startup incubator — and Washington Department of Commerce’s Maritime Blue initiative to create the 4-month program. There are 11 companies in the inaugural cohort, ranging from a healthcare provider for mariners to a whitefish jerky maker.

The startups will work out of WeWork Labs’ Seattle location and get access to mentors and advisers. WeWork will facilitate seminars and workshops to help the companies navigate challenges and obstacles.

Accelerators are common in the tech world, but rare in centuries-old industries such as maritime.

WeWork said the maritime industry in Washington state employs 146,000 people with an economic value of $30 billion. However, a lack of capital both in the Pacific Northwest and worldwide restricts innovation.

“We knew from our conversations around the globe that there are entrepreneurs and investors ready to take advantage of the blue economy as it’s growing exponentially in this next decade,” said Joshua Berger, Maritime Sector Lead for Gov. Inslee and board chair for Washington Maritime Blue.

Inslee, the self-declared climate change presidential candidate who exited the race in August, said the accelerator is part of a “larger endeavor we have in the state of Washington.” He noted plans to create the word’s largest hybrid-powered, auto-carrying ferries as one example of reducing emissions and becoming more energy efficient.

“So while we’re cleaning up the maritime industry, we think it’s the right thing to do to clean up terrestrial pollution as well,” Inslee said.

“SPBES provides high power lithium ion energy storage to hybridize or electrify heavy industrial equipment. Purpose engineered for the rigors of the commercial maritime industry, SPBES is safer and longer lasting than any other product on the market.” 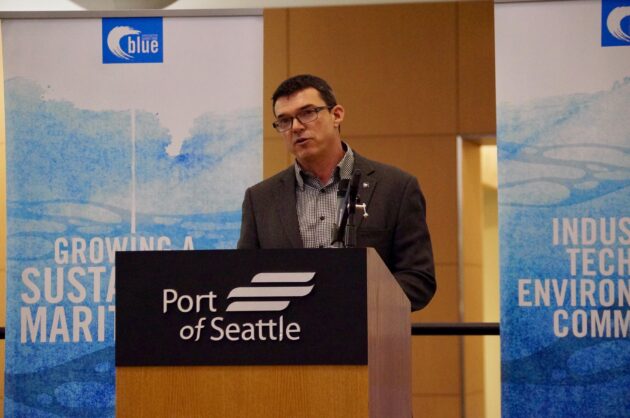 You can read the full GeekWire article here.