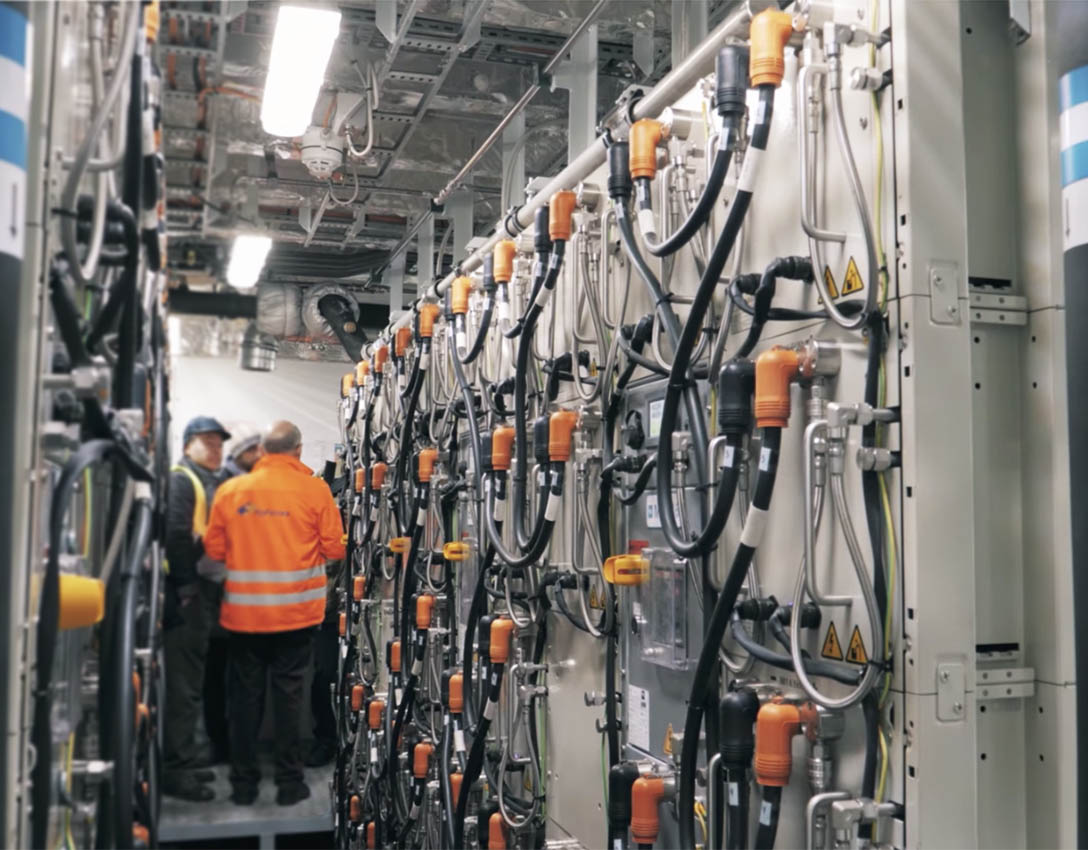 Owners may have a dilemma when picking an energy technology capable of lasting a vessel’s 20 or 30-year lifetime, writes Stevie Knight

Published In The MotorShip Magazine on June 12, 2020 by Stevie Knight. Link to the article can be found here.

Eco-legislation ensures shipping has to move on, but “being locked to a single option could make it tough to adapt” says Kjetil Martinsen of DNV GL: he points out that the fuels of today may not be those of tomorrow and choosing a low-emission alternative that turns out to be extortionately priced or unavailable “could result in stranded assets”.

But there is already a dizzying array of potential solutions “and everybody is considering everything… so all the cards are in play” he adds. Therefore, some believe the answer may lie in judicious spread betting.

Modular design may provide an answer: it certainly stands to relieve owners of a lot of drudge work as maintenance could be performed by the OEMs themselves, the result assured by the class societies. But it also holds the potential for shaking the industry to its foundations.

As Martinsen’s colleague, Knut Erik Knutsen of DNV GL remarks, “there’s been a gradual move by the big manufacturers toward ‘power-by-the-hour’… a service agreement rather simply selling an engine”.

Modularity could be seen as a logical extension of this approach, especially as it paves the way for greater standardization. That in turn broadens the appeal of remote, condition-based monitoring, “something that’s been held back by the number of unique, custom-built ships” he adds.

The potential is already being explored. The MIDAS project, that experiments with modules installed on Subsea7’s PSV Seaway Moxie and the Norwegian Coastal Administration ship OV Ryvingen, have navigation, communication and propulsion modules operating onboard to yield “continuous monitoring and specific health indicators”, says Knutsen.

But what’s so different about it, really? “At the moment the mechanical drives, the electrical lines and the control systems are not just in different packages but also different disciplines,” he remarks. “Instead, we suggest tying it all together into one module with one, single concern, how to maintain the function.”

This approach has a number of advantages. Firstly, “embedding a propulsion system inside a standardised unit gives you a much better idea of its performance and reliability”, he explains. “If something goes wrong, it’s far easier find out who’s responsible for putting it right.”

Follow the implications through and logically, this puts as much emphasis on defining the boundaries as system integration, inherently tightening up the scope for each OEM. In itself that will yield efficiency benefits for manufacturers.

This, in turn, ushers in a still more radical concept – what about swapping out the onboard kit if another solution appears more appropriate? After all, a defined output within a particular footprint appears supremely well-matched to a ‘plug-and-play’ approach.

DNV GL’s laboratory ship concept does just that. Envisioned as a vessel to test, qualify and benchmark new maritime technologies,  Experior is designed to be flexible in terms of interchanging onboard components and systems. Therefore, it holds the potential for interrogating a vast array of alternatives, from superstructure and cabins to power and manoeuvring kit, to comms and control, mostly by sitting them in dedicated containers with monitored interfaces.

Although not a commercial vessel, the ideas behind Experior may hold a clue to the future: its set up allows clients to calibrate and optimise their own innovations against the lab ship’s digital twin before installation.

In fact, according to Knutsen, a digital twin may be part of a modular delivery, allowing systems to be pretested in the factory.

There’s a further advantage. “So far full vessel reliability modelling has been challenging,” he says. However, since each module will have a health check element, it’s possible to network these together, creating a “system of systems”. It would, he remarks, gradually build up over time, being far less costly and troublesome to implement than dropping an entirely new, ship-wide layer into place.

It may also help resolve another niggling issue: cybersecurity. There’s often persistent doubt that the vessel’s onboard systems are as watertight as the hull, so modularity should provide more reassurance – firstly, it could potentially reduce shared weak points, secondly it “ensures that software systems are always up to date and robust in the face of challenges”, says Sverre Torben of Kongsberg Maritime Digital.

However, the MIDAS project has shown there are a few knotty issues to overcome – not all purely technical in nature.

Knutsen explains: “You can create a health indicator for a bearing with no problem, but doing the same for the power management involves thousands of signals. If the manufacturers are tasked with keeping their modules running, they will need to be able to pull the data out in the same way from any ship.” And, he adds, without it being “the labour-intensive process” it is at present.

It’s not just the OEMs: the information will have to be shared with owner, systems integrators and last but not least, the classification societies. As Knutsen underlines, “there are more than 10,000 ships on DNV GL’s books so we’ll need a good, sanitized way of sorting it all out”.

Although there is “some movement” toward developing an industry-wide ISO standard, he admits rather than trying to make existing arrangements line up, it’s far easier to accomplish coherency on a newbuild where a useable format can be implemented from the very start.

Any module worth its salt would need to cover all the bases: “Besides the monitoring, maintenance plans, approvals and so on, it would need to include designed-in safety systems,” points out Knutsen. The latter presents its own challenges as its characteristics change with the fuel. Take LPG, he says: “It’s heavier than air, so standard gas detection equipment in the ceiling won’t work.”

Further, while modularity relies on a set of discrete systems, safety kit appears to pull in the other direction. Ammonia, for example is toxic and corrosive, so if there’s a failure in any part of the fuel supply, the entire ship could be endangered. Therefore, these safety systems have to extend throughout the whole vessel.

“There is no perfect fuel, no perfect way forward”, underlines Niclas Dahl of Alfa Laval. “They all have pros and cons: some may simply be limited in supply. Some, like ammonia, require more in handling the risks.” But he stresses, this should not stop development.

Wärtsilä has been playing with modularity for a while: Nico Höglund explains that development really picked up with the release of the Wärtsilä 31 medium-speed four-stroke: “Before that, if you wanted to change from diesel to dual fuel, you’d have to re-machine the engine block…. but the 31 makes it all much more straightforward, you basically only need to add the gas components.”

It sets the scene for what lies ahead. Höglund adds: “Both methanol and ammonia are currently being evaluated as potential next-generation fuels, partly because they have the potential of being created in a completely green supply chain.” Interestingly, both can also be kept in liquid form with a modest amount of pressure and cooling.

Therefore, Wärtsilä’s modular approach should enable easier conversions: “If you have a dual-fuel engine running on LNG, the installation already contains the majority of what’s required, such as the fuel storage tank,” says Höglund, although both methanol and ammonia will need modified fuel injection along with process equipment and corresponding safety systems.

This is central, he says: “Outside its operational parameters, the engine can start to knock or miss-ignite. The engine’s automation system has to take action to ensure proper combustion in order to avoid a potential escalation of the situation, which could lead to shutdown. So it’s not just about optimising performance, it’s also about safety.”

Moreover Alex Grasman of MARIN points out: “One important factor is that burning alternative fuels in a combustion engine makes for a narrow ‘operational envelope’ compared to diesel.” Further, heavy seas compound the issue by adding dynamic loads to the system.

In short, new fuels require “tests on timing and management, and a lot of time spent searching for the sweet spot”, says Höglund.

While it might be expected that four-stroke, diesel-electric vessels like Moxie are the first candidates for a modular approach, Knutsen points out the big container vessels also tend toward fairly typical drive lines “with one or two two-stroke engines, propeller shafts and so on… so you could create a complete propulsion package delivered in a range of vessel sizes”.

Martinsen adds that when it comes to cargo ship engines “we are not suggesting swapping big lumps of metal, instead we’re talking about transitional technologies that can adapt to new requirements”.

In fact, large, robust two-strokes don’t need so much in the way of modification. For example high-pressure engines like those from MAN ES currently allow for mixing different energy sources such as methanol and ammonia with more standard LNG: “This strategy allows you to step down in stages over time, all the way to zero emission fuels.”

Ammonia and methanol aren’t the only candidates: there are potential crossovers from a number of directions. Wärtsilä has already equipped ethane carriers with 50DF engines, and within the company’s landside power generation arm are plants running on LPG.

But there are varying levels of challenge inherent in repurposing the different engine systems and so fuel ‘pathways’ will likely open up.

For example, Höglund points out that as liquid petroleum gas, LPG, consists largely of propane and butane, “it needs rather different treatment to LNG – which is mostly methane”.

However, when it comes to big two-strokes, Dahl adds: “While ammonia is still in the development phase, LPG is a good first step.” The two have enough characteristics in common that MAN’s ME-LGIP engine can burn ammonia, using the same cylinder cover, injection valve and gas block – albeit with the addition of larger tanks.

It’s worth mentioning alternative power technologies: “If you’re considering modularity, there’s a lot to be said for batteries,” says Höglund. And since the cells are now half the size and double the capacity of a decade ago, producers such as Stirling PBES are recoring their systems, retaining the cooling and control architecture but swapping the old cells for more efficient versions.

There are certain limitations: “If the amount of power taken out in one go stays at a similar level, your electrical equipment can remain roughly the same,” explains Höglund. However, increasing peak power output may impact other components, such as converters, transformers and switchboards – so those too could require future-proof capacity.

What it doesn’t promise is lower CAPEX. In fact, some research suggests that it will initially be more expensive – how much isn’t currently known – though as Martinsen has already pointed out, placing the wrong bet on the future will likely cost more in the long run.