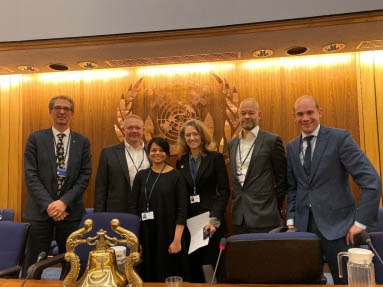 It has been encouraging to see SPBES being asked to feed into high-level discussions on decarbonisation at the International Maritime Organisation (IMO). Decarbonisation is one of the most important issues of our time, and battery-based solutions are clearly a big part of that.

In April 2018, IMO’s Marine Environment Protection Committee (MEPC) adopted an initial strategy on the reduction of greenhouse gas emissions from ships. The IMO’s stated goal is to see the shipping industry become carbon neutral as soon as possible within the century, using a similar mechanism of ‘ever more ambitious targets’ as the UNFCCC’s Paris Agreement has set for nation states. The IMO’s initial strategy specifically references the Paris Agreement and the targets that the 2015 document sets for unacceptable levels of warming.

Of course, the International Maritime Organisation and shipping industry as a whole aren’t acting within a vacuum. The sector has traditionally had a reputation for being dirty which it is slowly overcoming, and there have been calls from various powerful bodies to bring the shipping industry into other legally binding programmes for emissions reductions. The most visible of these is from the EU, which proposed introducing emissions trading in the shipping industry at the IPCC’s COP25 climate conference earlier this month.

The pressure to adopt greener solutions is growing, from both inside and outside the industry, and now is the time for the industry to plot its long-term future – away from GHG intensive fuels. The hope is that the IMO shows ambition in the solutions it chooses for the long-term.

To this end, SPBES CEO Brent Perry gave a presentation to the IMO on the potential of battery powered ships to meet these decarbonisation commitments, together with ZESTAs (Zero Emission Shipping Technology Association), an NGO committed to assisting commercial shipping to reduce emissions on a steep trajectory in line with 1.5 degrees. By creating a platform for zero emission ship(ZES) technologies to collaborate on ZES projects.

Realising the IMO’s targets – and those of Paris – will undoubtedly require the mainstreaming of battery technology. The market agrees; battery-based solutions, if they be fully electric or hybrid, are already being adopted at pace in certain sectors. Those include short haul passenger ferries, while there is an ever-growing market share in short to medium haul transporters. We believe that battery power will become ‘the new oil’ and become applicable to vessels of any size.

Aside from the obvious benefits of reducing shipping’s impact on global warming, one of the main advantages of battery power is that it has the potential to make life much more predictable for the shipping industry. Currently, almost every element of shipping is at the mercy of fluctuations in oil prices, making it difficult to plan ahead for long term economic and environmental sustainability.

We were pleased to see high level of Interest in the presentation, which generated some great debate from the participants.

It is clear, however, that there is much to be done in terms of building awareness of the emissions reduction technology that already exists for shipping, and how much can be done now to reduce emissions, without waiting for 2030, or 2050, to take action, given the current mechanisms that exist to reduce carbon.

This is why it is currently necessary for battery suppliers to ensure that they are innovating as much as possible to maximise the commercial benefits, safety and performance of battery technology.

SPBES’ unique CellSwap technology allows users to replace lithium cells without replacing the entire battery. Not only does this save on recycling at the end of a battery’s lifespan, but it also means that a new cell can be installed for 60% of the cost of buying a new system.

The advantages of this are twofold. Firstly, it means that our battery systems can be built using smaller systems that can be re-cored after five years, rather than the marine industry standard of ten.

Batteries built to last for ten years are necessarily larger, compensating for degradation in usable capacity over time. The capital cost of installing the smaller battery is far lower and leads to a much faster return on investment, as well as saving on space and weight. The smaller size also allows users to capture advances in battery technology sooner.

Of course, safety is key to more widespread adoption of batteries, as vessels with ESS become larger, and are required to operate for longer, further away from land as longer-distance use of battery power becomes more feasible.

At SPBES, our battery cells are individually housed – making isolating and replacing a damaged cell much easier for a crew onboard a ship and reducing risk of thermal build up. The risk is now low and as technology improves it is getting lower.