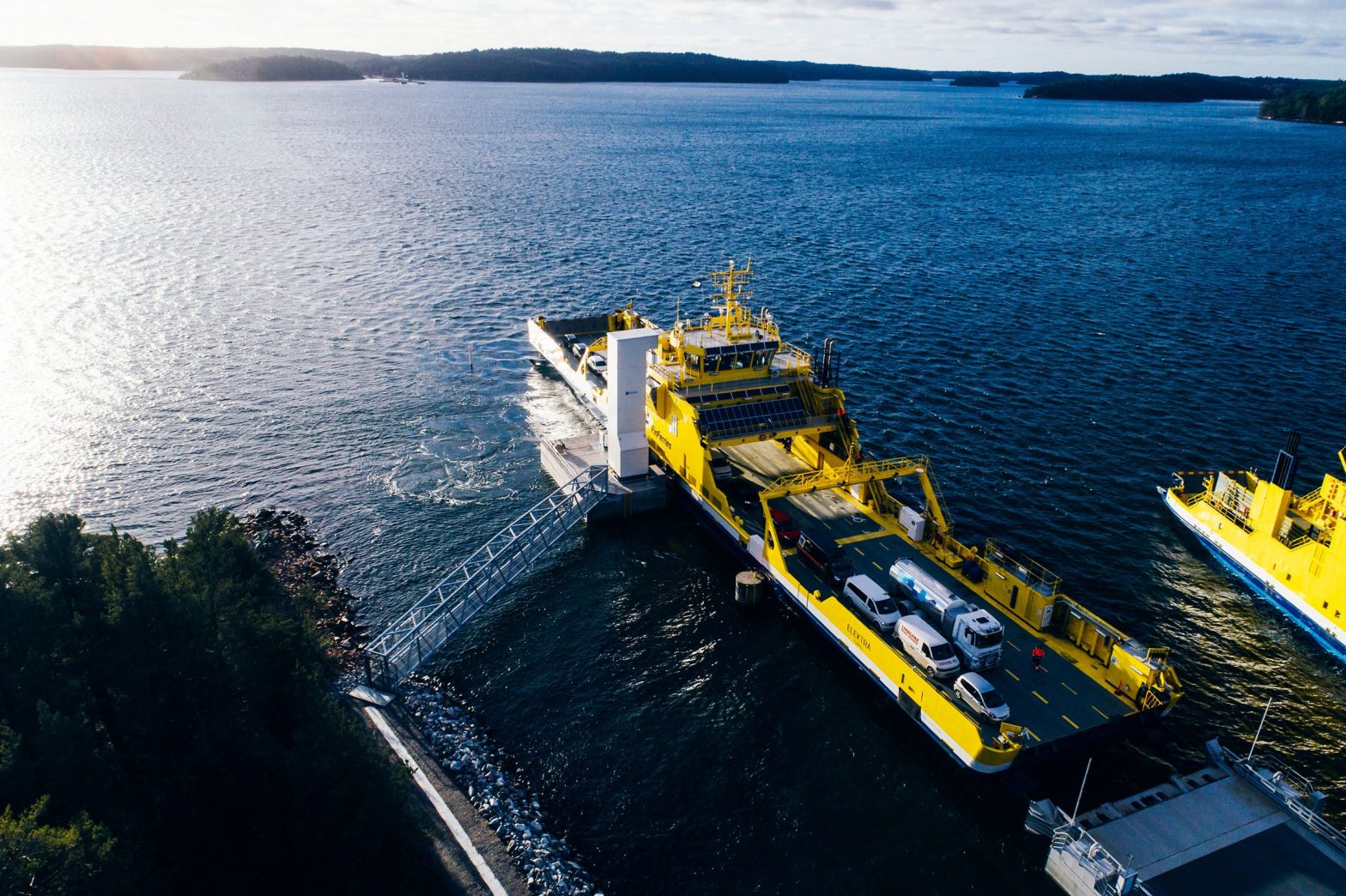 LATER THIS YEAR, the world’s largest all-electric container ship is expected to take its maiden voyage, setting sail from a port in Norway and traveling down the Scandanavian coast. Known as the Yara Birkeland, the ship was commissioned by Yara, a Norwegian fertilizer company, to move its product around the country. The company expects the ship to reduce carbon emissions by eliminating about 40,000 trips each year that would otherwise be made by diesel-powered trucks.

There are about 50,000 cargo ships operating around the world, and each year their engines spew about 900 million metric tons of CO2 and other pollutants into the atmosphere. Indeed, the 15 largest container ships alone emit more nitrogen oxide and sulphur oxide pollutants than all the world’s cars combined. Electrifying cars and other modes of transport promises to significantly reduce greenhouse gas emissions, and the same is true of the shipping sector.

But conventional lithium-ion batteries can only pack enough power to move small ships like the Yara Birkeland over short distances. If we want to electrify the world’s largest cargo ships, we’re going to need some better batteries.

Building battery-powered ships comes with two big problems. The first is that conventional lithium-ion batteries pose safety risks, because they use liquid electrolytes to carry lithium ions between the electrodes. If the components in a battery degrade, this can cause the cell to rapidly heat up and fail, a process known as thermal runaway. The battery’s heat can lead to a cascade of failures in nearby batteries. If these batteries release their chemicals as they fail, all it takes is one battery to catch on fire and cause a large explosion. That would be bad anywhere, but it’s particularly bad at sea where there are millions of dollars of cargo on the line and limited escape routes for crew.

Last year, a small fire in the battery room of a hybrid-electric ferry in Norway resulted in an explosion. The ferry operator was able to evacuate passengers and crew to land before the explosion, but a similar event on a cargo ship in the middle of the ocean could be catastrophic.

SPBES, a Canadian energy-technology company, is working to reduce the risk of electric vessels by designing marine energy systems that are resistant to thermal runaway. The company’s energy system, which is currently installed on roughly 20 ferries and tugboats around the world, uses lithium nickel manganese cobalt, or NMC, batteries. This is the same conventional lithium-ion chemistry you’ll find in most consumer electronics or electric vehicles, which have had their fair share of thermal runaway problems.

To lower the risk of explosions on boats, SPBES built a battery container with a liquid cooling system that wicks away thermal energy faster than a battery in meltdown can produce it. While this won’t prevent a battery from failing, it does prevent the kinds of cascading failures that lead to explosions, says Grant Brown, cofounder and vice president of marketing at SPBES. “Our technology is basically bomb-proof,” says Brown. “It’s really tough stuff.”

SPBES also designed its energy system to make it easy to swap out individual cells if they fail or reach the end of their lifetime. This helps address what may become a bane of the electric shipping industry: handling battery waste. Cargo ships will require hundreds of thousands of batteries, so the ability to selectively remove individual cells rather than scrapping the entire energy system will be critical to reducing waste. “Why throw away so much perfectly good material when you can simply reuse most of it?” asks Brown. “In terms of environmental impact, this is the future.”

A second major challenge facing electric ships is that conventional lithium-ion battery chemistries simply don’t pack enough power to move cargo around the world. Today, batteries based on NMC chemistries can only be used to electrify ferries and small container ships like the Yara Birkeland. Yara’s ship is powered by enough batteries to provide up to 9 megawatt-hours of energy. It’s the equivalent of 90 Tesla Model S battery packs, and enough for short trips of up to 30 nautical miles while carrying 3,200 tons of cargo.

But to meet the energy demands of massive international cargo ships, which carry tens of thousands of tons of cargo and use dozens of gigawatt-hours of energy, we’re going to need more advanced batteries. “Cargo ship engines can be as tall as a four-story house and as wide as three buses,” says Natasha Brown, a spokesperson for the UN International Maritime Organization. “At present, the size of the battery needed would likely limit the amount of cargo that could be carried, making it commercially nonviable.”

To meet the energy needs of the next generation of electrified boats, Washington-based energy-technology company Lavle is developing an advanced energy-storage system based on solid electrolyte batteries. Lavle’s cells are made by 3DOM, a Japanese battery manufacturer that created a new type of separator made from a porous resin that is stacked between the layers of solid electrolyte material that carry ions between the battery’s electrodes. Swapping out liquid electrolytes for solid electrolytes reduces the risk of thermal runaway. Adding in the new separator increases the battery’s performance by efficiently transporting lithium ions.

“From an energy density standpoint, we’re approaching three times what standard lithium-ion batteries on the market can do,” says Lavle CEO Jason Nye. But Nye sees Lavle’s solid electrolyte batteries as just a step on the road to an even better type of power pouch known as a lithium metal battery, which uses an anode made from solid lithium metal rather than a more typical carbon anode. Nye says its lithium metal anode can push the cell’s energy density even higher and would be easier to mass produce than a solid electrolyte battery.

Ben Gully, Lavle’s chief technical officer, describes this kind of cell as a “holy grail” in energy storage development. Lithium metal batteries can boost a cell’s energy density and charging rates because the lithium metal anode easily gives up its ions. But the lithium anode swells a lot while a battery is charging, which can cause it to decouple from the electrolyte. Furthermore, lithium metal is highly reactive with most available electrolytes, and this causes them to degrade.

Considering that the efficiency of rechargeable lithium-ion cells has only tripled since they were commercialized 30 years ago, Lavle’s batteries are showing the sort of large performance increase that is needed to electrify the world’s shipping fleet. For now, these batteries remain experimental, and the company still needs to demonstrate that they can be used in a commercial vessel. Lavle expects to begin deploying prototypes of its advanced energy systems in smaller vessels like ferries by the middle of next year, but Nye says that in the future their system could scale to meet the needs of large cargo ships.

Even with these new advancements in marine energy-storage systems, cargo ships may never be able to rely on battery systems alone. Agis Koumentakos, a Greek energy trader and coauthor of a recent paper on electric ships, cites several environmental and geopolitical challenges that come with the electrification of the maritime sector.

On the environmental side, each cargo ship will require dozens of tons of batteries that have limited shelf lives. The recycling industry isn’t ready to handle the surge in depleted lithium-ion cells, which come with several storage and handling challenges. Electrifying cargo ships could significantly accelerate the problem. On the geopolitical side, batteries require a lot of mined material, some of which is sourced from mines that employ child labor. Even if these materials can be sourced ethically, China controls a lot of the supply chain for lithium-ion batteries, and Koumentakos says policymakers may be wary of becoming totally dependent on China for maritime cargo transport.

But using batteries for cargo ships isn’t an all-or-nothing proposition. Instead, they may be combined with other clean forms of energy generation, such as hydrogen fuel cells, solar, or even wind. “Batteries probably won’t be a monopoly in ship propulsion,” says Koumentakos. “It’s going to be a mixture of technologies.”

Solar energy has been used on cargo ships for years to partially meet their electricity needs, but photovoltaic tech will never be energy-dense enough to power a ship on its own, Koumentakos says. Another option is to return to the original source of ship propulsion—the wind—using technologies like large metal sails or rotor sails to propel large cargo ships and reduce energy costs. And if the fabled hydrogen economy emerges in the coming decades, ships could implement hydrogen fuel cells as a primary source of propulsion and use batteries as backups.

The development of high-performance energy-storage systems for ships may also see wide application beyond the maritime sector. Nye says Lavle’s technology could also be a good fit for electric aircraft like the vertical-takeoff-and-landing vehicles currently under development as air taxis, and Brown says SPBES is exploring large-scale applications for its energy system on land.

The maiden voyage of the Yara Birkeland later this year will be a small but important milestone toward electrifying the world’s ships. As one of the only fully electric cargo ships in the world, it will show what’s possible with today’s technology and serve as a blueprint for the electrified ships of the future.